The folklore of local life – recording the excluded and hidden voice

In his book Leabhar Sheáin Í Chonaill published in 1948, Séamus Delargy records the tales of the storyteller Seán Ó Connail who lived in the parish of Prior, Co. Kerry. The book reflects what Delargy thought of folklore as a living, oral art. ‘No medieval Irish audience’, he said, ‘with its keen appreciation of a good tale…would have listened very long to the storyteller...Some of these manuscript tellings would occupy a reader or reciter not more than fifteen to twenty minutes’. [1] The telling of the story was the thing, an act meant to entertain and bring enjoyment. Many nights would be spent regaling neighbours around the fire with stories and songs. The recording of the story too became necessary and urgent so that traditional material would not be lost. Thus, methodologies and techniques were established that were employed to reveal the folklore of local life, of people (sometimes hidden people) and the landscape.

The outcome, represented by the holdings of the Department of Irish Folklore is an embedding of people and place in folklore practice, preserving and reflecting the distinctive perspectives, beliefs and aspirations of communities over time. Taken as part of a wider approach to understanding the history of a parish, we can learn not only about common proverbs and cures but about the place name, local roads and trades that were unique to that place. This information is a valuable source as it tells who the collectors and informants were, what they knew about their own locality, the names of those who had a trade, how they made and where they sold their produce, and what the people in the area used them for, as well as the local history of the roadways and topography of the parish.

Much of the Schools’ Collection material about Killererin, Co. Galway, for example, focuses on cures, proverbs and entertaining stories, and names those who might not otherwise appear in parish records.

Peter Greaney collected stories from Nora Greaney as part of the Schools' Scheme in Barnaderg Boys NS. Nora provided information on the weather:

There is a halo round the moon when there will be rain.

Martin Reilly also collected information from Mary B. Reilly about cures for chincough and sprains:

Milk given to a ferret and what it leaves drunk up by child affected is said to be a cure for the chincough. There is a very old cure for sprains. The person must go before sunrise to some place where three waters meet on three mornings in succession. Then the part affected must be placed in the water. This was thought an infallible sure in olden times. [3]

Similar stories are found in the Collection of neighbouring parishes in Abbeyknockmoy [4] and Tuam. [5]

Besides the cures and weather information collected, much of the Killererin folklore is unique to that parish and is important because it informs the local history from the perspective of people living there. Barnaderg Girls NS recorded the various meanings and spelling of the parish name. The meaning of Cilliarairain was recorded:

May mean (a) The wood of the masses of sheet iron

(b) The church on the good meadowland

The parish is the end of the territory of Hy Máine in this direction. The Castle built by Meleachlan O’Ceallaigh in 1242. O’Ceallaigh married Finuala daughter of Cashal Creabh Dearg. Both buried in Abbeyknockmoy. [6]

It is interesting to note the various, possible meanings recorded. There is still much debate in the parish today as to the true meaning of the parish name and where it originated. [7]

Old trades and related family history is also recorded. Candlemaking was once an active trade in the parish and a Mrs Morris would buy the tallow and roll out the candles that she supplied to the shops in Barnaderg village. Mrs Morris lived in the townland of Imanemore (some distance from the village) and kept a shop herself. Recording this story, Mary B. Reilly states that according to Paddy Rooney, the informant, Mrs Morris was ‘very skilled at the trade and got great demand.’[8] Other trades no longer viable and lost to the parish were those of basket making, thatching and clay pipe making. Connor Morris and Paddy Concannon used to supply the parish and the wider area with turf baskets made from rope while Tom Delaney used to make and supply clay pipes. [9]

The children of Garra NS in the parish also refer to basket making in their collections. A Mr John Noone recalls a blind man in the parish, Sean O’Reilly who was a basket maker. Sean was from the townland of Gortbeg and was the father of Pat O’Reilly. He made his baskets by boiling the switches and then he would ‘peel the bark off them and then weave them to and fro’. [10] The 1901 Census does list a John Reilly, a blind man aged fifty. John was married to Margaret and had two sons, John and Pat.[11] Without this local history the parish may never have remembered John as a basket maker as his occupation on the 1901 Census lists him as a farmer.

Pat Howley in the townland of Ballina was also known locally as a great basket maker. His baskets were often used by those living in Ballina to hold turnips for the cattle. [12] Another man, Michael Higins, made baskets for bringing home the turf by loading them on the donkey’s back and for bringing out clothes after they had been washed. Michael’s procedure for making his baskets involved boiling the sallyrods in a large pot and when ‘they would be fit he used to peel the skins off them and make them into baskets. When they used to want to make baskets they would stick some sally swatches down in the ground and put more in and out between them until they would have the basket made’ [13]. The people who bought the baskets usually used them for picking potatoes. [14] Another man, used rushes, not for basket making, but for thatching. John Murrough from the townland of Ballinastack used to thatch all the houses in the parish and the surrounding area.

According to James Noone, John Murrpough earned about five shillings a day:

He used also buy hazel switches in the market and cut them for the thatch. John Murrough used to make “bobs” for the top of the house or as they used to call it the “comb” … He used to be about six days thatching a house. He used to put on four “strackes” in the day each “strack” about 1½ feet wide. He is about 75 years of age now and has given up thatching about eight years. [15]

Important information on the roads in the districts also helps inform the transport and infrastructural heritage of the parish. Oral histories collected in the parish refer to the crossing of fields on the way to school, as well as the use of mass styles as the present road network had yet to be constructed. This is reflected in the Barnaderg NS material. Bridie Lohan refers to ‘the cutting of the road’ from Tuam to Dublin that passes through the village.

Her informant, Patrick Lohan, believes that this was to facilitate the mail coach. This coach, ‘…crossed the green at Barnaderg and then went over a very high hill. This hill was considered too steep for the coach so a new road was cut round the base of the hill’. [16] Today this hill leads to St. Mary’s church in the parish and the ‘new road’ passes through the townland of Lissavalley towards the direction of Dublin. Maureen Dolan also refers to this hill in her story collected from Martin Dolan. [17] She records that;

…about a mile from Barnaderg there is a stone bridge. The place is called “Polla Chappail” because it is said that the horses belonging to the mail coach fell into a steep incline here one time. The roads went straight up from there for about one quarter of a mile and then turned came out again where there is a small bridge which is known as the “Droctachen” afterwards the main road was made. [18]

The old coach road is still called “the old coach road”. It is still used by the villages going to the shop and it is safe now on account of the traffic. It is a lovely walk during the summer. There is a hedge at one side and pasture and tillage land on the other but one side is lovely. It is fenced at both sides. There are primroses, wild violets and trees on both sides. The trees give a delightful shade in summer. Primroses grow abundantly in summer the hawthorn is in bloom. I come that way to school. [19]

Coupled with a study of the historical maps from the Ordnance Survey, these accounts provide valuable local information.

[17] This information led to a decision in the parish to officially name the litlle bridge referred to and a plaque was erected there in 2013.

Finding your place - the truth on the ground

Finding your place - the truth on the ground 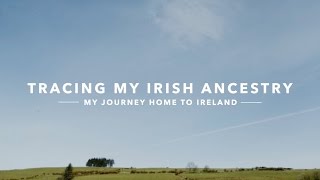 "Knowing your family history is one thing, living it is another"